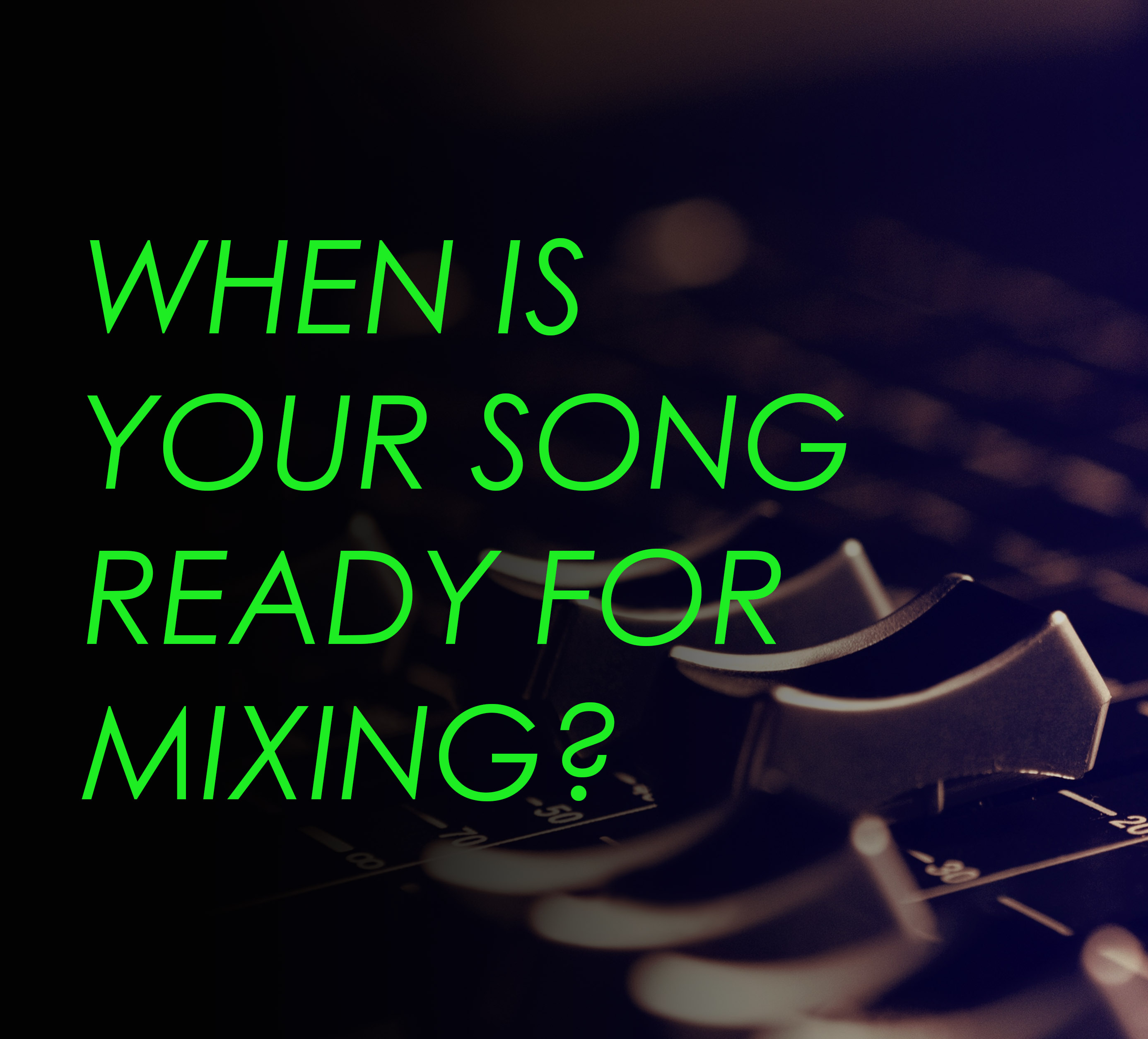 The mixing stage of a recording is one of the most important stages.  The question is, when exactly is your song ready to mix?  Well, today I want to talk about some of the important things that need to take place before you should send your tracks out for professional mixing.

It’s very easy to get excited about the mixing stage of your music production because that’s when the fun begins.  It’s also easy to rush into it without realizing that you perhaps haven’t 100% completed the song arrangement.  Maybe you’re not sure about the lyrics in that second verse or the way the outro flows.  The concept of “fixing it in the mix” really can detract from the purpose of mixing.  If you’re at all uncertain about the song arrangement or elements of the song as a whole, it’s quite likely that these issues will resurface during mixing and cause a lot of frustration for both the artist and the mixing engineer.  This is where the value of an initial demo recording is important to iron out all of those issues with the song arrangement, so you’re not faced with a whole heap of time wasting during the recording and the mixing stage.

Moving on from the song writing and arrangement element, it’s important to ensure that you’ve captured the recording the way you initially intended.  Now, it’s quite common for a song to evolve during the production and recording phase, but it’s important to arrive at that point where you feel that the song is essentially complete.  Let’s use the analogy of a car being built.  The blueprint is the songwriting phase, recording is building the framework, mixing is making sure all the parts fit correctly and provides a cohesive finished product.  Then of course you have mastering, which is the stage where the final polish is added and the final inspection (so to speak) is completed.  So, getting back to music, it’s really not viable to go back to the ‘blueprint’ phase without seriously risking the whole project being canned and started from scratch.  Whilst it’s a lot easier with modern digital recording to revert back to an older version of the song, it can really stifle creativity and your song or album could easily end up in that scrap heap of half-finished recordings.   So, save yourself the pain and make the decision to put a bookend on the recording stage before moving on to mixing.

A rough mix completed by either the artist or producer can serve more than one purpose when sending your song out for professional mixing.  Firstly, it can provide the mix engineer with an overall vibe and tone the artist is going for.  Secondly, it can be used as a bit of an instructional mix to highlight which elements of the song need to be in focus at any given time.  For example, you might have 15 different guitar tracks in your session, all of which may be similar, yet have subtle variations.  The artist may envision guitar track number 7 be unusually prominent during the chorus.  Now, an experienced mix engineer will often be able to sense where these instruments should be placed in the mix and be on the same page pretty quickly.  But they also might hear things completely differently and apply a different approach. So that’s where a rough mix can be very useful, in providing context.  A rough mix can often become a double-edged sword, because if an artist becomes too attached to the rough mix, it can hinder the mix engineer and prevent them from doing what they do best – which is use their best judgement to mix your song professionally.  To use another analogy, it would be like going to a restaurant and asking the chef to prepare your meal in the same way you cook it at home.  It sort of defeats the purpose!  So, if your rough mix is used for the right reasons, then yes it can definitely be a helpful addition to a mixing session.

Generally speaking, I prefer to receive dry tracks without any effects prior to mixing, however there’s a time and a place for specific effects to be included on the individual tracks.  Firstly, if you have a very specific effect that is integral to the overall sound of the song, it’s a good idea to include that version in the files you send to the mix engineer.  I would advise being careful with effects such as reverb, because it’s likely they will become louder and more prominent during mixing, once compression and EQ are added.  I recommend including a dry version of the track without any effects, as this provides a lot more flexibility during a mixing session.  An experienced mixer will usually have a wide variety of effects to choose from and will often be able to apply an even better effect to further improve the sound.

Arguably the most important step to get right is exporting your individual tracks out of your DAW session.  Now, it’s become very common for people to refer to these tracks as ‘stems’.  Originally the term ‘stems’ was used to describe groups of instruments or tracks that were consolidated to create separate ‘stems’ or ‘group tracks’.  For example, all drums, all guitars, all vocals etc.  Individual files that are exported out of your session were also known as the ‘multi-track’ or also the ‘track out’.  This set of files is literally every single individual track from your recording session.  For example, the kick drum, snare, hihat, bass guitar, acoustic guitar, the list goes on.  I’m not going to go into the detail of how to export your files, however I have prepared a useful checklist that you can download HERE.  I’ve received a lot of good feedback on it and the processes apply to all major DAW’s.

Thanks for taking the time to read this article, I hope it has helped you be better prepared for sending your song out for professional mixing!