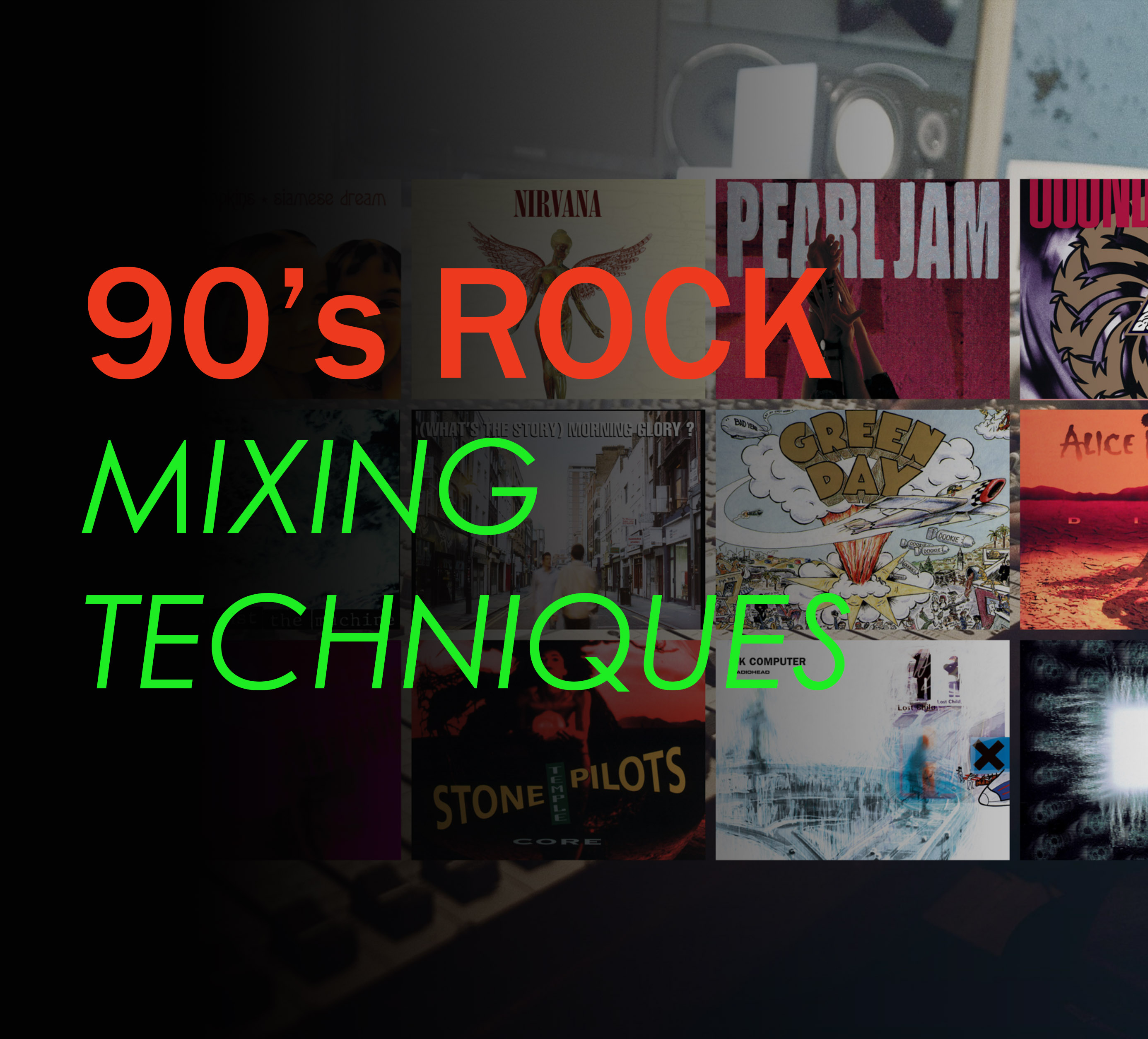 The 90’s had some of the most amazing rock and alternative music.  Today, I’m going to delve into the mixing side of things and talk about some of the techniques that were used to get those amazing sounding records. So, grab your beverage of choice, sit back and let’s get into some 90’s rock mixing!

In the modern world that is computer-based DAW’s, the recording studio of the 90’s was largely a 100% analog workflow.  Yes, there were digital consoles with digital automation etc, but the process from recording through to mixing and mastering was ultimately an analog process.  Studio time was expensive, so a lot of time was invested in getting the equipment setup correctly from the start.  It was more beneficial for bands to be better rehearsed and prepared for a recording session, to avoid budget blowouts and increasing the risk of problematic sessions.  It wasn’t unusual for the recording engineer to flow into mixing, as the two tasks were often blended as part of the normal analog process.  One of the big differences between mixing in analog compared to digital was the actual sound of the console and outboard gear.  Each console (even if made by the same manufacturer) often had slight variations in tone and sound.  So this meant, that a particular mix engineer could develop a ‘signature sound’ based on their console or gear.

One of the elements that still amazes me to this day, is the sound of drums on 90’s rock recordings.  They were hard hitting; compression was noticeable and they jumped out of the speakers in a way that is rarely replicated in modern productions.  Whilst drum sample replacement was still used to a degree, the overall approach to drums was bigger and punchier compared to many of the mixes from the previous decade in the 80’s.  Reverb was not as prominent, if it was used, it was more of a roomy sound, not so much the big reverbs of the 80’s.  More attention was paid to the sound of the overheads and cymbals also.  I’ve always been a big fan of Andy Wallace and I recommend checking out some his mixes as examples of great drum mixing.  In particular his work on Nirvana and Rage Against The Machine was superb.

If there’s one production and mixing element that is more prominent than any other, it would have to be distortion.  Distortion and saturation was everywhere in 90’s rock mixing!  From the guitar pedals, to the amplifiers, to the pre-amps, to the console pre-amps, distortion was pushed to the limit in most areas!  The sound of natural harmonics and saturation is one of the things that makes recordings of this era particularly pleasing to the ear.  Whilst many of these types of distortion can be emulated with plugins these days, there’s still something to be said about analog distortion and the sound that it produces!

Modern mixes have a far greater emphasis on vocal clarity and precision mixing.  We have plugins and software that are surgically accurate and can pinpoint problem frequencies with the click of a mouse.  Back in the 90’s, EQ was applied with a much broader paintbrush, so to speak.  The EQ curve of the console EQ and outboard gear determined the overall tone and how you could correct a sound.  In the context of a 90’s rock mix, it was more common for vocals to not always be the brightest element of the mix and have an overall darker tone.  Cymbals and other instruments that occupy the upper frequency spectrum often took priority over the vocals, which were often placed further back in the mix.

By the time the 90’s arrived, there was an emerging trend with bands moving away from the effects soaked, reverby-sound of the 80’s in search of a more organic sound.  It was no longer cool to have a crystal clean, sparkly sound.  It was also even less cool to be in a hair metal band or power ballad group.  New bands were coming onto the scene with a more punk ethos, reviving some of the themes and sounds of the 1970’s.  The difference was, they had far greater technology and equipment to make their records.  It wasn’t unusual for bands in the 90’s to cut their tracks live in the studio, which meant subtle imperfections were often a part of the final mix.  This really contributed to the ‘human’ element of the music and made it relatable and enduring for the listener.  Quantized drums and auto-tune were virtually non-existent in the 90’s and if they did exist, I’m sure they would have been met with much resistance from a lot of the bands of the time.

If you listen closely to a lot of 90’s rock, the mixing console automation is actually quite noticeable in some recordings.   That’s because mixing on an analog console was in itself, approached as an ‘instrument’ and performance.  A mix engineer was as recognized for their sound as much as they were recognized for how they ‘performed’ their mix with automation.  The purpose of automation is to highlight the drama and dynamics of a recording and make the song ‘larger than life’.  This was mostly achieved by fader automation in the 90’s.  By contrast, automation is far more advanced with modern digital workstations.  We can easily automate a delay or reverb or any aspect of our mixes these days, with the click of a mouse.

Most mix engineers in the 90’s were mixing on Yamaha NS10’s.  Many still use these speakers today, I have a pair of them in my studio that I also use for referencing.  If you were mixing rock or alternative bands in the 90’s, there was little need for sub-woofers or the need to make room for sub-frequencies in a mix.  The high-pass filter was one of the best friends of the mix engineer and were aggressively used on mixes in the 90’s.  It still is a technique that’s widely used in today’s rock mixes, however there’s definitely a lot more beef in the low-end of modern mixes and arguably a more balanced representation of the frequency spectrum.  There was a big focus on punchy mids in the 90’s and you can really hear this by listening to how massive the rock mixes sound on small speaker systems today.  I’m still blown away by albums like Green Day’s Dookie, or Rage Against The Machine’s debut album, the first Stone Temple Pilots album, amongst many other great albums from the era.