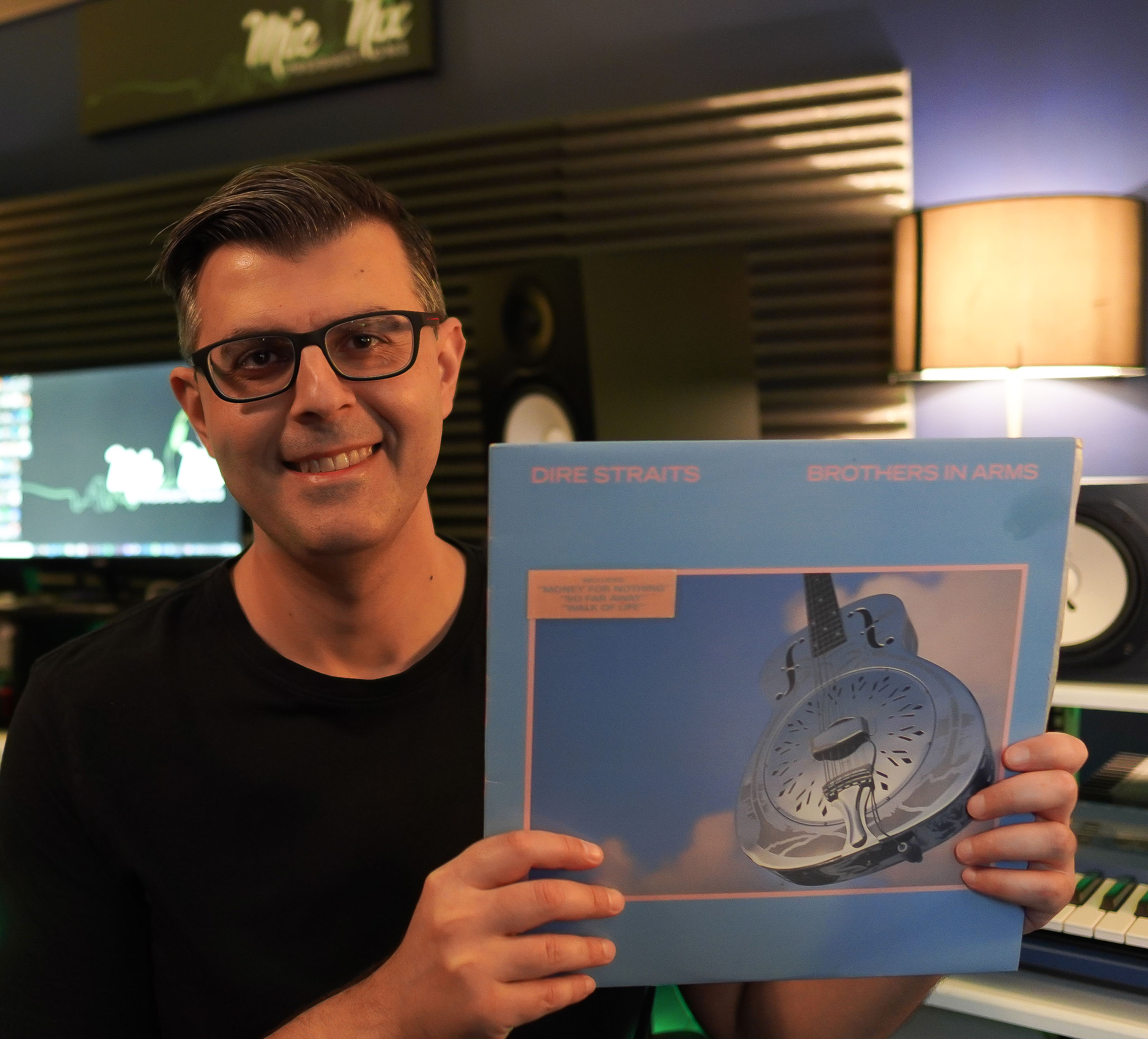 Well, I thought I’d finish off the year with a review of one of my all time favourite albums and one that was very influential for me.  It is none other than “Brothers In Arms” by Dire Straits.

Dire Straits were a band that inspired me to pick up the guitar as a youngster.  I remember being captivated by the sounds and feel that guitarist and singer Mark Knopfler was able to produce.  The clean bell-tones of the Fender Stratocaster just appealed to me and it was something quite different to the usual glam-rock and new wave that was largely filling radio stations in the mid-1980’s.  With today’s album review, I want to chat about some of the standout elements of the album, both from a production perspective and also a musical aspect.  So, sit back and enjoy a look into “Brothers In Arms” by Dire Straits.

One of the elements that captured my attention, even to my untrained youthful ears at the time, was the overall recording quality of the album.  There’s a couple of reason’s why “Brothers In Arms” stood out in terms of the sound it produced.  So, let’s wind the clock back to 1984, when recording sessions for the album commenced at AIR Studios in Montserrat.  Now, it was well known that Mark Knopfler had a keen interest in recording technology and wasn’t afraid to invest in the best cutting edge equipment available at the time.  Co-producing the album with Neil Dorfsman, “Brothers In Arms” was one of the very first albums to be recorded on a Sony 24-track digital tape machine.  The recording console used at AIR Studio was actually a Neve 8078.  The band was well-rehearsed prior to the recording sessions commencing and Mark Knopfler had written all 9 songs for the album.  The most famous song from the album “Money For Nothing” had a very unique and what has now become, an iconic guitar sound.  The sound was largely achieved by accident in the studio when Mark Knopfler was experimenting with a ZZ Top guitar sound.  The microphones being left in the wrong position around Mark Knopfler’s amplifier at the end of the day and then the next day when recording started again, they captured the sound with the microphones in the same position.  What resulted, was an amazing sound of a Gibson Les Paul through a Laney amplifier and the final sound on the album was that unchanged recording!  In comparison to the band’s previous albums, “Brothers In Arms” had a polish and sheen that set it above their previous work in terms of commercial accessibility.

One of the aspects that propelled Dire Straits into the stadium rock stratosphere, was the hit singles from “Brothers In Arms”.  Whilst the album was initially met with fairly critical reviews from the UK press, the response around the world was quite the opposite.  The album actually had 5 singles released from the 9 total tracks, the biggest and most successful being “Money For Nothing” and “Walk Of Life”.  Both songs captured the MTV audience, with “Money For Nothing” featuring some of the most memorable displays of 80’s neon and computer animation at the time.  The simple melodic structure of the main hit singles captured a new audience and ensured a sellout stadium tour in the coming months and years.  “Brothers In Arms” was certainly a slight departure from their first 3 albums, which were all strongly rooted in blues and country rock influences.

“Brothers In Arms” was nominated for 2 Grammy’s in 1986 including album of the year and it won a Grammy for “Best engineered album, non-classical”.  It also won “Best British Album” at the Brit Awards in 1987.  In 2006, they won another Grammy for the remastered 20th Anniversary release with “Best Surround Sound Album”.  “Money For Nothing” was also widely recognized for it’s ground-breaking music video, which featured some of the very first computer animation of human characters.  At the MTV Music Video awards in 1986, “Money For Nothing” won “Best Group Video” and “Video Of The Year”.

Personally, I love the entire album and often listen to it from start to finish, without skipping tracks.  I still believe there are some standout tracks that deserve some special mentions.  Firstly, the opening track “So Far Away” has one of the most unique guitar sounds and a dreamlike, floating sound.  It really gives the impression that you don’t want the album to ever end and yet it’s only just beginning!  It then seamlessly flows into “Money For Nothing” with it’s majestic intro build featuring vocals from Sting and one of the best all time drum solo’s!  After the guitar rock mastery of track 2, things then get a little more playful with “Walk Of Life”, with it’s country-esque arrangement melody and a rolling train-like guitar rhythm.  Somehow, Mark Knopfler was a master at making his singular core rhythms sound like multiple guitar players at the same time.  Saxophone solo’s were massive in the 80’s and it’s hard to find a more iconic and tasteful saxophone-based song than track 4 “Your Latest Trick”.  I’m sure that sax players around the world would have, at some point, played this song or at the very least, had the desire to learn how to play it.  Rounding out my standout tracks, the title track “Brothers In Arms” is a fitting finale to the album.  The introspective guitar work and melancholy lyrics written around the time of the Falklands War really made the listener visualise the experience of a soldier during wartime.

Thanks for taking the time to read this blog, I hope you enjoyed today’s classic album review of “Brothers In Arms” by Dire Straits!