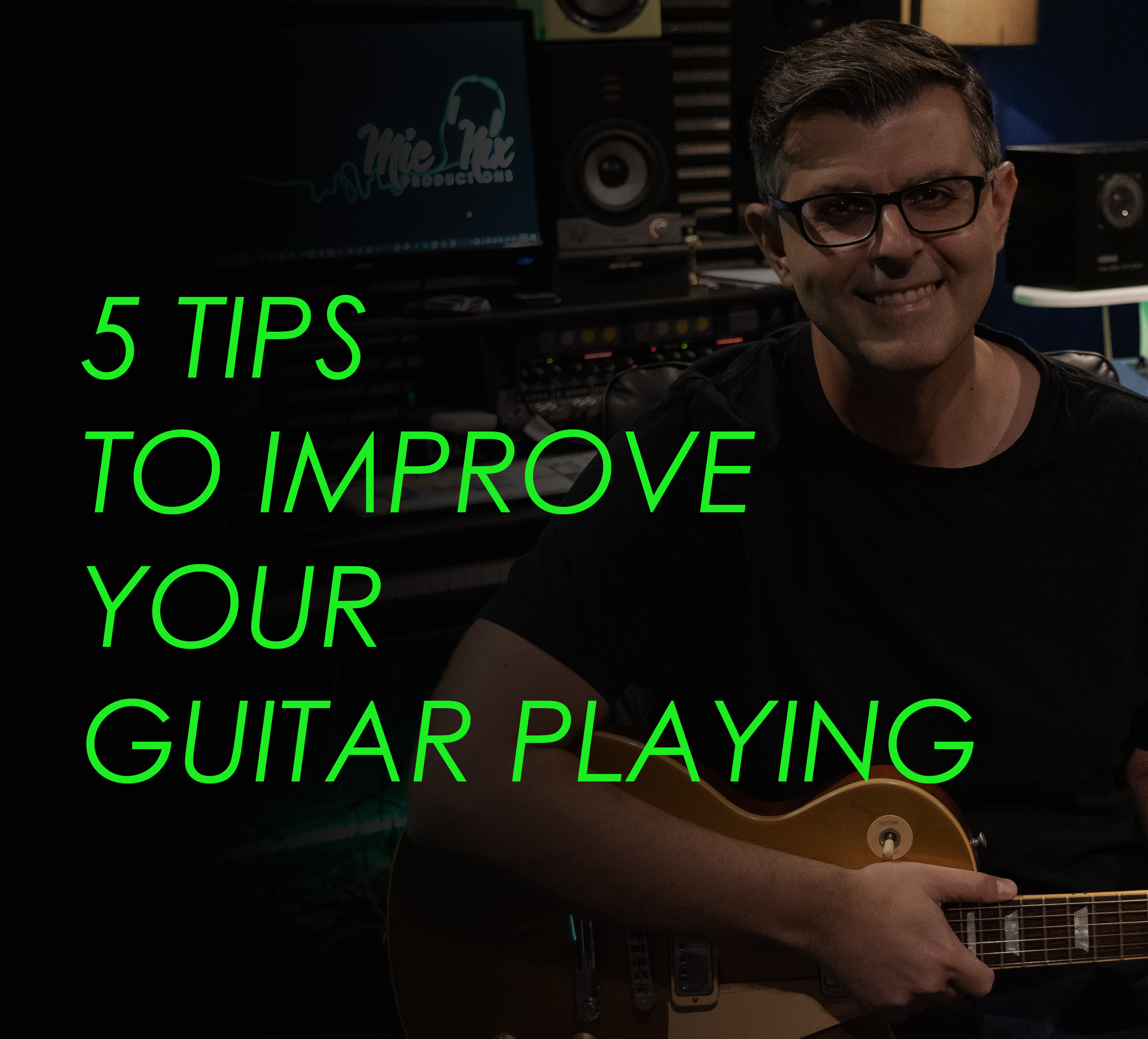 No matter what level you are at with your guitar playing, there’s always room for improvement and growth.  Levelling up your playing doesn’t happen overnight, it takes dedication and consistent focused effort.  Today, I’m going to give you my top 5 tips on how you can improve your guitar playing.

I’ve been playing guitar for as far back as I can remember, but started taking my playing seriously in my early teens.  Whilst a lot of my friends were out on the football field or skateboarding down the street, I locked myself in my bedroom spending countless hours learning how to play my favourite songs by my favourite guitarists.  Mostly Dire Straits and Jimi Hendrix.  Over the years, I’ve found there to be some key actions that have always resulted in an improvement in my personal guitar playing and I’d like to share a few of those with you today.

One of the elements of guitar playing that is often over-looked by eager players, is the ability to play in time correctly.  A lack of skill and experience in this area is often first exposed in the recording studio, when the guitarist is requested to play along to a click track or metronome.  It’s usually met with a shriek of horror from the said guitarist, who perhaps has never played to a metronome before (the shriek is often a lot worse for drummers, by the way!).  Playing along to a metronome or click track is one of the best methods for tightening up your playing and also can be used when learning scales and other rudimentary skills.  You can set the tempo to your preferred speed and gradually increase it or make changes to the speed as you get better.  After a while, you will start to naturally feel the right tempo in any given song and will easily be able to identify when a band member is playing out of time at rehearsal, playing live or in the studio.  Especially with modern productions being heavily quantized and played to a strict grid, getting your metronome chops up to scratch will be a worthwhile investment in the long run.  And remember, you don’t need to play to a boring click, you can easily use a drum loop or drum pattern to make it feel more natural and fun to play along to.

I mentioned earlier that I used to spend many hours in my bedroom learning songs by bands like Dire Straits.  I literally would sit on the end of my bed with a tape recorder, pressing play and rewind on a small section of the song until what I heard on the tape sounded exactly the same as what I was playing on my guitar.  Sometimes, it would happen quickly, other times it could take days or even weeks to learn a specific part.  Learning how to play other people’s songs forces you to get out of your technique comfort zone.  We all have our own technique and style and when you’re learning guitar, our own limitations and perspective can really hold us back.  It’s important to choose material that is within reach of your current playing level.  If you choose a song too advanced, you will likely get discouraged quickly and it will have the opposite effect.  These days, there are many useful tools and apps you can use to learn other guitarist’s songs, thankfully you won’t need to rely on the trusty old tape recorder!

GET A MENTOR & PRACTICE MORE

I arrived at point with my guitar playing, sometime in my mid-20s, where I thought I was pretty good.  I’d arrived at that comfort zone where I could comfortably play gigs, record in the studio and pretty much play what I enjoyed at the time.  Little did I realise there was still a whole new world of guitar to learn.  I was then fortunate to have the opportunity to have a new mentor and guitar teacher that quickly cut me down to size and highlighted exactly how much I didn’t know!  I was previously 100% self taught, never had a guitar lesson in my life.  This probably contributed to the chip on my shoulder, because I had the opinion that perhaps I didn’t need a guitar teacher to get better.  How wrong I was!  My new mentor really pushed me to my playing limit and forced me to get out of my comfort zone.  Before I knew it, I was playing advanced jazz and blues material that I could have only dreamt of playing years before.  It really gave me a new appreciation and gratitude for the guitar, which inspired me to practice even more.  Consistency is the most important element when learning new guitar parts, you really need to dedicate intensely focused periods of time in order to yield the results.  Yes, that does mean locking yourself in your room and buckling down until you get it 100% right!

If you’re a songwriter as well as a guitar player, fresh inspiration often comes from fresh sounds.  Fresh sounds come from new and exciting melodies and progressions.  The ability to continually be inspired by your own playing and creativity is generally limited to your knowledge of chords and melody.  Learning new chords is one of the most exciting things to spend time on when seeking to improve your guitar playing.  Many famous songs were written by the inspiration drawn  simply from the discovery of a new chord, melody or sound.  Even within the framework of your standard major chords, there are numerous variations and shapes of those chords that can make for interesting new progressions and melodies.

Versatility is a highly valued attribute amongst musicians and guitar players.  The ability to slide between genres and effortlessly play a required part is one of the most useful skills to have as a guitar player.  This can open many doors for those that aspire to be session players or touring musicians.  Having an open mind about exploring new genres is really important in continued growth for not only your guitar playing, but for those of you that have songwriting aspirations as well.  I remember early on in my playing when I started my first band, I was very fixated on the aesthetics of the genre we had chosen to play in, which was best described as alternative/grunge/rock.  The mere thought of exploring jazz or reggae or other various genres seemed to both myself and my bandmates, to be almost blasphemous and something that should never even be mentioned or considered as musical option.  But over time, developing an open mind to the creative elements of all musical genres is what spawns real original ideas.  So, don’t be afraid to explore what might be an unfashionable genre to your friends or bandmates and reap the benefits of a fresh learning experience.

Thanks for reading, I hope you find these 5 tips helpful in improving your guitar playing!