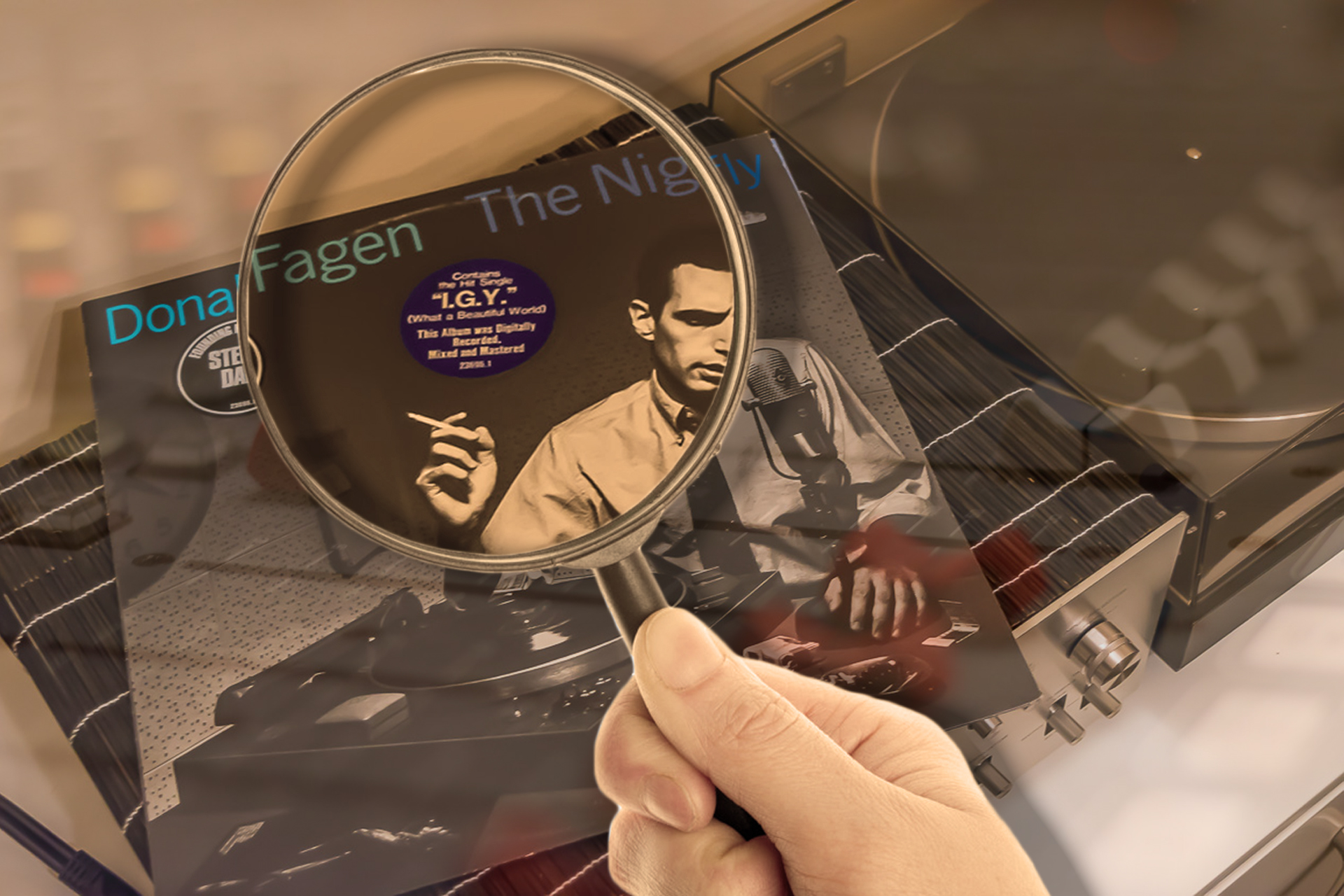 Released in 1982 and still widely considered an audiophile reference album, “The Nightfly” by Donald Fagen is a sure-fire classic.  In this month’s article, I am focusing on track 1, the notable “I.G.Y.”.  The song really sets the tone for the album and is both sonically and lyrically intriguing.  Whilst focusing on predominantly the mixing element of the production, I will also touch on more general aspects such as arrangement and lyrics.  Here we go:

The introduction immediately gives a sense of drama and contrast.  The airy, floating sounds of the synths/vibes, the sparkle of the cymbals, and the weight of the kick drum announce themselves in recognizable fashion.  The most appealing aspect of the arrangement is the cinematic feel that it creates, with it’s genuine beginning/verse/chorus/synth solo variations.

Some have insisted the song is sarcastic, others believe it is an awe-inspiring optimistic view of the future world we may never see.  My philosophy with song lyrics, is that it can mean anything you want it to, within the realms of your own context and enjoyment.  To address the obvious, I.G.Y. stands for International Geophysical Year, a scientific project which took place between July 1st 1957 until December 1958 that marked the end of a long period during the Cold War when scientific interchange between East and West had been seriously interrupted.  Conceptually, the song explores futuristic ideals that, by today’s standards, may be considered wildly optimistic and reflect the optimism of the late 1950’s.  The opening line of “standing tough under stars and stripes, we can tell this dream’s in sight”, is sung with a defiance and surety that encapsulates the ideals of the time.

Rhythmically the song is actually quite straight forward, in that the main beat consists of a 4/4 pattern with a swing feel.  Starting with the kick drum, the weight and punch of the kick is apparent and has a tastefully compressed sound.  The overall tone of the drums as whole certainly have that sound which suggests there is some generous pushing of the console preamps, a ‘pleasing’ yet subtle saturated sound. The drums are also quite forward in the mix and the snare in particular has substantial EQ boost somewhere around 6khz and above.  I particularly like the balance of the overheads and cymbal mics, which can easily become overbearing in so many mixes of the era mostly due to copious amounts of not only EQ but reverb. The subtle addition of the tambourine to the left side of the mix makes a huge difference to the signature sound of this track.

The guitars are somewhat inconspicuous throughout the song.  The verses are quite sparse and have one guitar panned to the left playing mostly palm-muted single notes with a few arpeggiated chords.  There is also a subtle chorus effect on the guitar.  During the choruses, the chords are played almost in a funk-staccato fashion and there appears to be a stereo staccato synth lead line that mimics the tone of the guitar used during the verses.  It certainly tricks the ear into ‘hearing it’ as a guitar and is a clever effect that adds to the rhythm of the chorus.  Whilst it is a stereo synth lead, it has been subtly panned to the right to give the effect of a wider stereo image with the opposing guitar on the left.

For those of you that are Donald Fagen fans, I’m sure you will agree that keyboards/piano/synths are really what it’s all about.  The early-mid 80’s being the peak of what I would consider ‘tasteful’ use of hardware synths that were often less programmed and more often played by highly proficient musicians, of which Fagen is no exception.  The tonal diversity of the keyboard sounds on this song alone represent both a keen and considered approach to selective tasteful flavours.  The intro alone has numerous swirly synth sounds that float across the stereo image, creating a sense of space and a feeling of anticipation of the song’s pending direction.  The basis of the chord structure is centred by the Rhodes-sounding keys (likely electric piano that is masterfully played by Greg Phillinganes), book-ended by the arp sequencer on the left and the staccato minor synth chords on the right.  The signature horn melody is superb and is interestingly complimented by the synth harmonica that appears in various parts of the song, including a solo section!

As with many of the preceding Steely Dan recordings, Fagen’s vocals are set quite far back in the mix and mostly dry.  Whilst there is definitely some reverb apparent, it has quite a long pre-delay which assists in retaining that dry sound, yet still gives a feeling of space. Fagen’s vocal delivery is unique and does appear to have a partial lisp sound which gives the impression of heavy de-essing.  Whilst there is likely some de-essing of the upper frequency being applied, it is also likely that sound of Donald’s voice plays a large part in the overall final sound.  The vocals are quite heavily dipped in the midrange area which gives them a partially ‘scooped’ sound, yet tonally balanced and pleasing to the ear without being at all harsh.  The backing vocals in the chorus have a fairly wide stereo image and give a crystal clear contrast to the vocals as a whole.

One of the most powerful mixing tools is the usage of the stereo field with panning.  “I.G.Y” incorporates many traditionally classic panning methods.  The kick, snare and lead vocals are up front and dead centre (as they should be), the hi-hat panned to the right and tambourine to the left.  This mirrors the same experience as watching a right-handed drummer play live and you are sitting in the audience in the centre.  The drum overheads in this mix have been very carefully balanced to avoid a ‘washy’ cymbal sound and there is a distinct absence of room microphones in the mix.  Quite typical of late 70’s and early 80’s recordings in the genre.  As mentioned earlier, the guitar is panned to the left and the diversity of the stereo image is fleshed-out by the synth/keyboard tracks.  The electric piano appears to be recorded in true stereo which helps maintain a wide stereo image throughout the whole song.  The usage of the stereo synth lead line (also recorded in stereo yet panned slightly right) brings a percussive contrast to compliment the guitar on the opposing side.  The horn section is beautifully balanced left and right with excellent depth and punch.  The backing vocals round out the sound with the left-to-right panning style.

There are some quite deliberate and accentuated uses of compression throughout the song. Most notably the snare is treated with a ton of smack and I’m yet to find a speaker or headphone system that this snare doesn’t sound good on!  As a mixing reference, it speaks volumes.  The drums as a whole sound like they are also being sent to a compressor for some ‘glue’, but in a lighter fashion just enough to bring the drums together.  The dynamics of the song as a whole are not affected by the use of compression and represents a textbook approach that still holds relevance in today’s productions.  One of the main reasons this album has become sought after for audiophiles is it’s meticulous mix and dynamic range.  On a track level, it’s clear that compression has also been use quite liberally across the synths and vocals.  The Rhodes also has some fader automation applied, which is most noticeable during the verses.  This helps create a full sound during the sparse sections of the song, yet still retaining a dynamic feel.

It’s no secret that there is also a liberal amount of EQ being applied throughout, particularly at the glossy top-end of the frequency spectrum, which displays clarity without harshness.  On viewing the the EQ curve below, we can see the superb balance and representation of the entire spectrum:

The punchy nature of the track is in its treatment of the low-mids between 200-600hz.  This is an area that is often treated with a lot of subtractive EQ resulting in a thin, weightless recording (or a noticeably ‘scooped’ mix).  This also indicates the extreme precision by which each instrument has been recorded, to allow it to breathe within its own frequency domain.

Whilst not prominent, there is still quite a liberal use of subtle, layered reverbs and delays.  The critical aspect, as mentioned earlier, is the pre-delay on the vocals.  This is the delay from when the reverb is triggered to when the reverb tail commences.  Quite often (genre permitting) a decent pre-delay will retain the presence of the vocal and create a ‘3D’ audio image without the need for a large amount of reverb.  The backing vocals here have a touch more reverb applied, which often works well and certainly does in this instance.  The pre-delay can also be heard on the snare, particularly when listening on headphones it’s very clear that the reverb is actually quite prominent, yet still subtle enough to blend into the background. 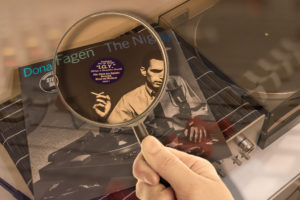