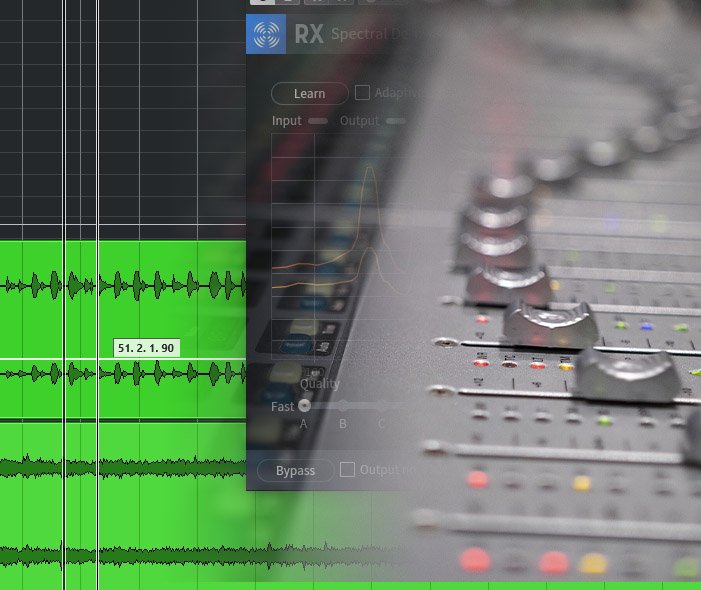 If you’ve ever wondered what the difference is between audio editing and audio mixing, well today’s article is for you!  I’ll be going through some of the key differences and why you should separate these individual audio processes.

There’s no question that the lines have been blurred in modern music production processes and techniques.  The ease of access to all the necessary tools with basically just a laptop, means that you can easily be recording, editing, mixing and mastering on the fly, interchanging between the tasks as needed.  Whilst there’s definitely some benefits in this approach, I’d like to go through some reasons why you should consider separating some of these stages of audio production.  Today, I’m going to focus on editing and mixing.  The following are some key differences between editing and mixing and the benefits gained from treating each stage as it’s own important process.

One of the first tasks that falls under the audio editing category, is completing a general clean-up of each individual audio track.  This should include noise reduction/removal of unnecessary passages of audio and creating smooth fades and crossfades between audio clips.  The last thing you want your mix engineer doing is worrying about dirty, noisy audio tracks which ultimately holds up the entire mixing process.  Izotope RX is a lifesaver when it comes to editing, however if you’re not experienced in using it, you can potentially do more damage than good.  If in doubt, consult your mix engineer prior to starting the mix to get some advice on what might be needed in terms of a general audio clean-up.  If you’re doing the editing yourself, it’s worthwhile spending some time learning some of the key functions of plugins like RX to help you through the editing stage.

The editing stage is also when you should be checking the tuning of all audio tracks, in particular vocal tracks.  Yes, creative tuning such as auto-tune is often applied during mixing, but it’s important to have a solid baseline when it comes to tuning.  If something is drastically out of tune, it can really skew the perception of the track during mixing and can leave the mix engineer at a proverbial “fork in the road”, in that they may not know which direction to take the track.  I’m not suggesting that everything should be perfect, but simply listen to the track in detail to ensure that nothing sounds out of place.  Working closely alongside tuning is the timing of each audio track.  For example, do the drums sound tight and in time?  Does the start of the guitar come in at exactly the right point?  Does each vocal phrase flow as intended?  These are elements that should also be addressed during editing.

I’ve often mixed songs where the artist has felt that the song structure needs improvement or changes.  For example, removal of a verse or shifting a chorus into a different section of the song or addition of a bridge.  If you feel that your song structure is not yet set in stone and you’re sensing you may want to make changes, that suggests you’re not quite ready for mixing.  Think of mixing as that stage where the song feels pretty much done, but it just needs some balancing and careful adjustment to make it shine!

Audio effects are something that are utilized from the recording stage right up until the final mastering.  This is where things often get intertwined, when it comes to music production.  If we refer just to the editing and mixing stages, you may want to consider which effects are non-negotiables when it comes to the final sound of your song.  For example, you may have a bass track that you recorded and have become particularly attached to a chorus plugin that you placed on the track when you were recording.  Or maybe you used a guitar pedal that had a unique sound that you don’t want to lose.  It’s a good idea to finalise this during editing and make a call on if you want to keep the effect on the track.  Ideally, if you can have the option of a dry version and a version with the effects intact, that gives you maximum flexibility during the mix.  If you’re sending your track to a mixing engineer and you’re not 100% sure which version to use, sometimes it’s good to get their opinion on which one works best sonically.

Quality control is closely linked to the audio clean-up stage and paying attention to this during the editing phase will set a much better baseline for your final mix.  If you’re a recording artist, think of yourself as an inspector of the final product coming off a meticulous production line.  You want to check each individual track and ask yourself “is this the absolute best quality that I can produce”?  Is each individual track consistent?  Do some tracks sound better than others?  Ask yourself why?  Giving yourself the final opportunity to critically assess the audio will give you that feeling of genuine satisfaction when the final mixing and mastering is eventually completed.