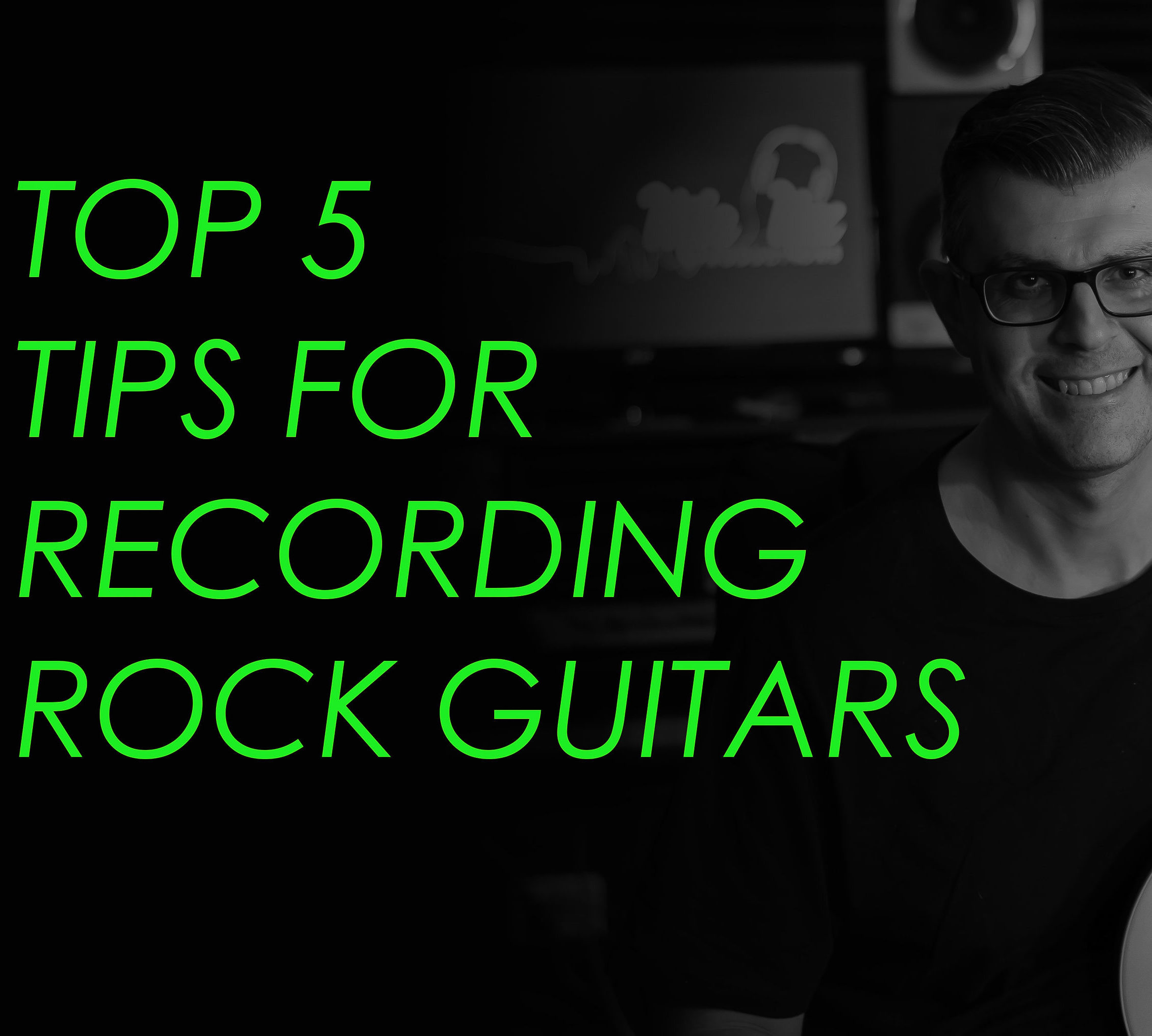 When it comes to recording rock guitars, I have to say that I believe that less is more.  In terms of the recording aspect, I should preface this by stating that I’m largely referring to distorted rock rhythm guitars, as opposed to lead guitar.  It’s become a modern trend to capture countless versions of the same guitar during tracking with the aim of then fixing it in the mix, or indeed using all 20 or 30 versions of the same guitar!  I will highlight some reasons with this month’s blog that provide you with some tips and reasonings as to why there is a much simpler and more powerful alternative to help you achieve those massive guitars you’re looking for!

To begin with (and using the Gibson Les Paul as an example), the type of pickups in the guitar play a fairly significant role when we are talking about rock guitars.  Humbucker pickups are a regular feature in many famous rock recordings and the Les Paul is an example of a guitar that utilizes these pickups in most instances.  Humbuckers are double-coil electric guitar pickups that are very efficient for distorted guitars because of their low noise and high output.  An alternative example of single coil pickups are the famous Fender Stratocaster guitar.  I’ve been a Strat-slinger for many years and whilst these guitars are also fantastic for rock, the main difference is the pickups are noisier and simply don’t have the same beefy output that the humbuckers provide.  Make no mistake though, many famous rock guitarists have used Strats and coupled with the right amp and distortion treatment, can achieve an equally big sound if recorded correctly.

The decision to select a traditional microphone/amp/cabinet recording arrangement verses DI (or direct-input) can make a significant difference to your recording.  The great news is that modern recording equipment and methods allow for us to utilize both.  When recording guitars, I will often split the guitar signal to both the amp and the DI, which then allows you to capture both at the same time, to allow for multiple mixing options.  I find myself more often gravitating towards the recorded amp sound and the DI take is often used to create some stereo spread or tonal variation in the mix.  It’s important to note that when recording an amp/cabinet, you will be capturing the sound of the amp in the room at that time, so ensure your room is setup correctly with minimal reflections to prevent unwanted room sounds in your recording.

Selecting the right microphone for capturing guitar amps/cabinets is a critical stage in the process.  I must also preface this section by saying that I’m not taking into consideration pre-amp or interface combinations, but making the assumption that you may have access to such tools for your recordings.

Some of the microphones that are my go-to for recording guitars in the studio are the SM57 (a great dynamic allrounder), the Shure SM7B (traditionally a broadcast/voice over microphone, but has fantastic low-mids and a rounded tone) and the Sennheiser e906 (excellent mid-range clarity and punch and a very user-friendly mic).

One of the most powerful tools in a rock recording is the usage of panning and multi-tracking.  Once again, the approach of less is more is my recommendation.  Some of the most amazing, huge sounding rock records were recorded with a minimal number of rhythm guitar tracks, but careful use of panning and mix placement is the key.  For example, if you have recorded 3 or 4 distorted rhythm guitar tracks, you can achieve a wide, full sounding stereo image by hard panning left and right and combining with half-panning.  It’s important to note that guitars generally operate all within the midrange of the frequency domain, so you only have a certain amount of headroom to use before things start sounding cluttered and undefined.  Believe it or not, the more tracks you continually layer on top of each other, the smaller and weaker things will sound due to the lack of available frequency space, not to mention the potential of getting squashed into compressors and limiters.  My advice is to record 2 very strong rhythm guitar tracks, hard pan left and right.  If at that stage you feel that it is lacking, then layer one at a time until you find the vibe you’re looking for.  This, of course, may also be dependent on the number of guitar players in your band!

Finally, we come to arguably the most important aspect of recording rock guitars; that is the performance itself!  You could have all the right equipment, be in the greatest recording studio in the world, but if your performance is not right, then the end result will also be problematic.  Generally speaking, being well prepared before heading into the studio is the key.  As a guitar player, make sure you know your parts 100% and have decided on the final tone that you’re intending to capture.  You don’t want to waste valuable recording time with amp tweaking or making variations to chords or song sections.  Being focused on your part and having the confidence to execute it flawlessly will result in the type of recording that you will always be proud of and will allow the engineer to focus on making it sound it’s best!

I hope this has given you a brief insight into some of my methods and recommendations for recording rock guitars.  Happy riffing and catch you soon!