5 TIPS TO IMPROVE YOUR SONGWRITING 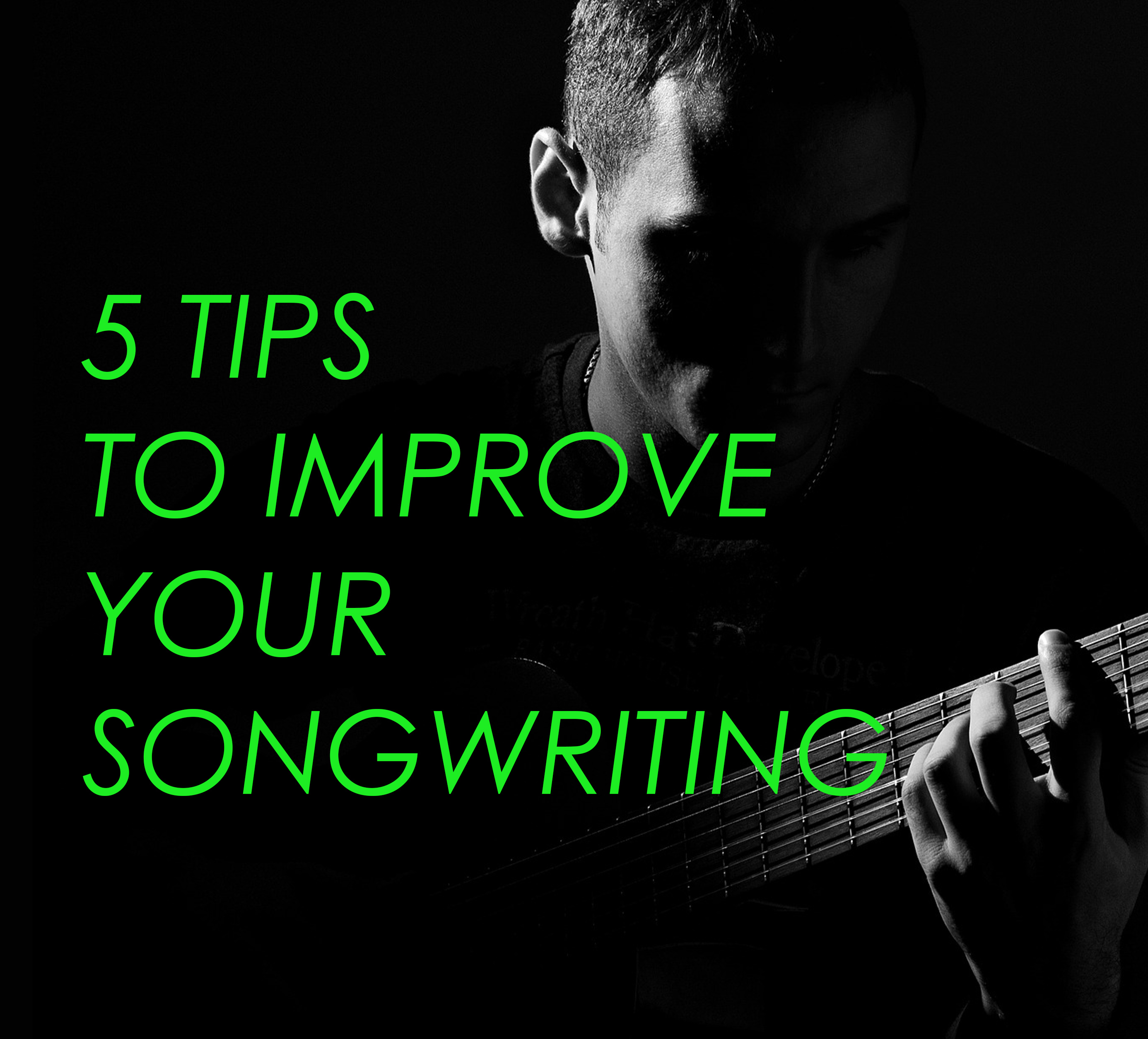 Improving your songwriting is not something that happens overnight.  In this latest article, I would like to provide you with five actionable tips that you can utilize to help you on your songwriting journey:

Inspiration is one of those things that can rear it’s head at any unusual time and is the most unpredictable aspect of creative songwriting.  Inspiration often comes at some of the most unusual times; you could be driving along in your car and get an idea for a song, you could be in the shower or you could be half asleep lying in bed, then roll over and get your pad and pen or your iPhone to make a few notes on your next track. As a songwriter, it’s easy to become frustrated when you’re feeling like you’re uninspired or you can’t channel any inspiration.  A good approach that I encourage you to have a go at, is to think about what are those elements that have made you inspired in the past.  For example, if you’re listening to your favourite music or your favourite song/album, have a think about what it is about that song that makes you feel good.  What is it about the song that makes you turn up the volume?  Or replay it 10 times in a row?  Have a good think about how you can recreate something that’s perhaps an element of that song and channel the inspiration to recreate your own version of it.  As an example, you might love the drumbeat in this particular song, so why don’t you create a drumbeat that has that vibe and try to build around that framework of that initial inspiration?  Inspiration doesn’t necessarily just come from other music in terms of songwriting, you can be inspired by any aspect of your life, so certainly have a think about what are those exciting elements are in your life that have caused you to feel inspired in the past and really try to channel those specific elements.

Improving your theory doesn’t necessarily mean getting out the textbook and studying musical notation.  There are so many online resources.  YouTube is a great resource for picking up new tips around songwriting.  For example, if you’re a guitar player and you’re wanting to write more music within the blues genre but you’re feeling like maybe you’re a bit stuck in your playing, I’d suggest looking into some of the more theoretical aspects of blues playing and pick an area that maybe you’re not so proficient in.  Try to learn a bit more about it and practice that element, then bring that into your new songs and try to create something fresh around those new ideas that you’ve just learnt.  Whilst on the topic of improving your theory, there’s certainly nothing to stop you from also learning a new instrument or becoming better at another instrument.  If you are a guitar player, have you tried playing bass as well?  Try to become a multi-instrumentalist where possible.  Those individual instruments can often be a great source of inspiration too.

Cowriting has become one of the most popular ways for proficient song writers to get more material out there on the on a regular basis.  If you’re a solo artist or singer-songwriter, have a think about some people that you might want to collaborate with and co-write, you’d be amazed at how someone else’s approach to songwriting can open up a wide range of doors for you.  Most importantly when cowriting, it’s critical to have an open mind because quite often you need to make allowances for someone else’s style and approach.  If you become really narrowminded and only focus on the way that you write songs, it’s unlikely you will gain any benefit from the cowriting process.

Technology is arguably the biggest element you can utilise to improve your songwriting.  If you have a think about the volume of music that’s being released each week, you’ll see artists that are prolific and releasing a lot of material on a regular basis. Many of these artists do that by utilising technology.  So, if you’ve got your own home studio or even a very basic set up with a laptop or a DAW that you’re recording with, try to learn a little bit more about the available tools that can help you construct new songs.  For example, there are a wide range of chord creators that software programs have, so you can actually have a very basic chord progression or even a single cord and use chord creators to build ideas for different progressions.   You can trigger the chords via a very basic MIDI controller or a synthesiser with only a few keys because the complete chords can be mapped to one single key!  This is a great option if you’re wanting to play complex chords on a piano/synth but are not proficient enough to play them in full and you will still achieve the melodic elements! You’d be surprised at how many new ideas you can create simply from having access to chords you may not actually know how to play!

There’s no shortage of a famous singer-songwriter’s and artists from history that claim travel or various locations as a huge source of inspiration for their own songwriting.  Now, I’m not suggesting that you need to go on a huge lavish overseas holiday in order to gain some inspiration, but that I am suggesting is have a think about changing your environment.  Think local!  That could mean something as simple as moving from the same room that you keep writing your songs in, to going to a different location or go to a park or cafe and watch some people walk around and take notes.  Get your creative mind thinking from a different perspective!

As always, there are no fixed rules when it comes to songwriting and the methods that you can use to improve, but certainly I think these five tips will really give you a few different perspectives on how you can improve your own songwriting and start coming up with a lot of fresh new material.